Posted by Vivienne O'Keeffe on March 12, 2017 in Projects 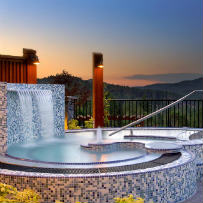 Sante Spa Victoria was inspired by the natural elements – Wood, Water, Fire and Earth – which were interwoven into its spa treatments to inspire, nurture and empower the integrity of wellbeing.

Best of the City 2018
Blackpress

“I had the pleasure of working with Vivienne O’Keeffe for over 7 years. Vivienne was our Spa Consultant for a multi spa group. Throughout the years she helped our organization do many things from start-ups, shut downs, product development, re-branding, renovations and implementing of all spa systems. At my location Sante Victoria, she provided support, coaching and many insights into the spa industry. Her understanding of the industry and leadership skills are second to none. She brings such a wealth of experience and is able to teach it in an inspiring and empowering way. My team always cherished any of their visits with Vivienne. We often find ourselves asking what would Vivienne do. I am truly grateful for all she taught me in my first Spa Director role and I have no doubt my growth and our business growth would not be what it is today without Vivienne’s guidance. During our time together we renovated, re-branded, changed our spa culture, added in spa systems, certified in Spa Quality (ISO 9000 standard) grew the business substantially year over year and turned our spa into profitability. If you are a new owner, re-branding, re-building, or need to turn over a new leaf, look no further she is one of the best in the industry and will add great value to your business.”~Jen Spencer, Spa Director, Sante Spa Victoria