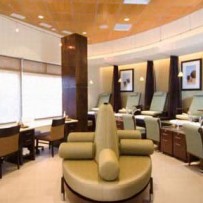 The Spa Ritual, which opened in 2008, is now Calgary’s premier day spa venue and is a Canadian leader, being Canada’s only member of the esteemed Green Spa Network. Spa Profits Consulting were involved on every level of this full development project, from concept to fruition. Uniquely and meticulously styled on Southeast Asian spa rituals and therapies, The Spa Ritual provides an authentic “path to your rejuvenation.”

The Spa Ritual is also the first spa to obtain Level 4 SpaExcellence certification following on-site inspection by Spa Quality LLC USA. Level 3 certification in 2010 required the spa to have a formal, documented quality system for all its activities (as specified by The International Standards of SpaExcellence(SM)2010 of SpaQuality LLC); including day-to-day operations, guest interactions, behind-the-scenes processes, leadership, teamwork, system evaluation, and continual improvement.  The level 4 honour was given in 2011 when assessment verified that The Spa Ritual’s quality system not only continues to function in accordance with the Standards, but is also performing at an even higher level.

Awards and recognition for The Spa Ritual