Posted by Vivienne O'Keeffe on March 15, 2005 in Articles 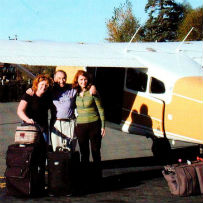 “Clear!”  cautions Dr Peter Fransblow to everyone in the vicinity in general before firing up his Cessna 180 “on wheels”. The elegant airplane shuffles on the tarmac of Boundary Bay airport in south Vancouver, dragging its tail like a chore –  until the power is applied and the tailplane lifts in sprightly fashion, revealing innate eagerness on the airplane’s part to relinquish earth and assume it’s natural role in the sky. We are embarking on a a flying tour – a voyage of discovery that will see Mary Hughes (Spalife’s editor), our gracious pilot and guide (the proud owner of Vancouver’s #1 day spa, Spa Ethos) and I visit and experience the best of four great spas on both coasts of Vancouver Island.

This journey was prompted by a passing comment, derived perhaps from a degree of provincial pride at a national Leading Spas of Canada conference in Niagara-On-the-Lake. “We have some great spas in B.C.” enthused Peter to everyone within earshot, at a break between speakers.  The comment, not necessarily of boastful intent – though clearly exuding genuinely felt pride in quality west coast standards – was overheard by the editor of Spalife, Mary Hughes. Before the evening was out, the trip – a flying tour – was planned and the preparations had begun.

I am not used to traveling in small aircraft. Secretly, I dreaded the flights. I was very pleasantly surprised however, by the total lack of turbulence in the air as we seemingly floated, unmoving, over the Gulf islands, heading ever westward – securely and comfortably cosseted, aloft in a tranquil calm sky, by a very much heavier than air machine that faithfully served its owner for almost 23 years.

We arrived at Victoria Airport and a limo awaited our arrival, to transport us to the beautiful Brentwood Bay Resort and Spa. We were immediately impressed with its commanding position overlooking the water, making for maximum visual impact of the remarkable natural surroundings. Visiting a resort spa is all about the total experience, not just the spa’s treatments themselves. We were greeted at the reception desk and taken to our lavish rooms – serenity enveloped me as I gazed in admiration at the exquisite details of my room, from the fine soft linens to the welcome cookies and glass of elderflower water placed there to aid ease the weary traveler.

Using organically grown pinot noir grapes from the local vineyard, fresh and enriched with their antioxidant benefits, the experience began with my feet soaking in warm water. Then my mission was to crush the small grapes with my feet – an unusual feeling – indeed a first for me.

Then followed an exfoliation with pinot noir grapes, sea salt with essential oils of citrus and ylang ylang oil, followed by a fantastic massage with cabernet sauvignon and holly oil, which left me silent. While the nail polish was drying I was offered a glass of cabernet sauvignon and I sat back to admire my colourful set of ten toes.

Taking the B.C. Ferry from Schwartz Bay to Galliano Island, a relaxing 90 minute trip (there is no suitable landing strip on the island), we headed for the Galiano Inn and Spa. Not surprisingly, considering its impeccable situation right on the beach, with the sights, smells and sounds of the ocean filling every sense, the spa is conceptually developed around the healing properties of water.

Set in a color alternating steam room, the body treatment began with a warm aromatic paste that exfoliates dead skin cells from the body. This treatment definitely stimulated my circulation with its energizing water and lavender massage. I was really impressed with the delivery by, and thoroughness of, the well-trained therapists.

Complementing the sea-side location was a rustic, country-lane setting to the rear of the property, where we enjoyed a clear dew-drop enhanced walk on the morning of our departure from this picturesque place.

Returning to Victoria, we flew to the Kingfisher Oceanside Resort and Spa in Courtney – an airstrip below materializing conveniently beneath the Cessna’s undercarriage at seemingly the last moment. The Kingfisher Spa’s amenities were unusual, with no expense spared to create the Pacific Mist Hydropath – incorporating strong European-styled communal hydrotherapy in an indoor recreation at the Pacific shoreline. This path takes about an hour to experience, the therapeutic properties being hydro-massage which promotes circulation, detoxification and imparts a deep sense of relaxation.

Afterwards we all slept soundly in our ocean-side suites, waking up to a wonderful view of seals playing in the water.

A delightful treatment combination with the hydropath is their Relaxation Massage, with accumulative benefits of hydrotherapy and manual manipulation massage, increasing blood and lymph circulation and importantly reducing stress.

The final spa destination takes us on the spectacular and scenic westward flight over Vancouver Island’s mountains, lakes and provincial parks towards Ucluelet and:

The luxury Tauca Lea Resort & Spa (now Water’s Edge) is an ideal base for adventures up and down the famous Pacific Rim National Park and is located on a small island connected to the mainland by a bridge spanning a mystical mist shrouded creek, which undulates in harmony with the topography of the site.

Our suites were a soothing monochromatic white – such a stark contrast to the deep green of the trees directly outside the window. The spa architecture is inspired by the natural surroundings of the resort and is a balancing and grounding combination of complimenting warm stone and natural woods.

A very impressive and complete experience, with a misleadingly plain name – this facial began with a back massage called Reflexothermale. Thoroughly cleansed and toned, the facial skin was then analyzed. (This is the intimidating part for most of us)  Specific products were selected and I underwent an exfoliation followed by a scalp massage. Next began the elaborate massage; soothing the face, neck, shoulders and décolleté. This was enhanced by a facial mask. At this stage I was granted an opportunity to contemplate the holistic experience.

Towards the end of the day, as we prepared to ready ourselves for the quick flight back to Vancouver, a rustic mist rolled in off the Pacific, settled over Tofino and refused to move. All flights in or out were grounded. Had we been holidaying with ample time available to snuggle up by blazing fireplaces while natures damp blanket moved slowly on, we probably would have taken the mist in our stride. But we weren’t holidaying and had business schedules to adhere to, necessitating the abandonment of the Cessna in a hanger at Tofino and the speedy negotiation for a hire car to take us on our return trip. Peter returned later in the week, with a friend who was flying that way, to retrieve his aircraft – and prepare it for our next spa odyssey.

Published as “Spas on the Fly” in Spalife magazine Spring 2005

Vivienne O’Keeffe, AAD, PEA, CIBTAC, is President of Spa Profits Consulting Inc., and an expert in designing successful spa concepts. She is also an international consultant in developing product lines, treatment plans and training programs, a member of ISPA and Spa Industry Association of Canada (for which she won an Outstanding Industry Service Award in 2001, 2005 and 2012), and a member of International Management Consultants Inc.